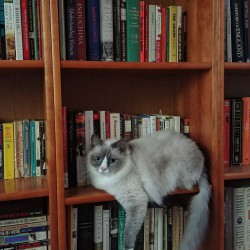 Between Friends: The Correspondence of Hannah Arendt and Mary McCarthy 1949-1975 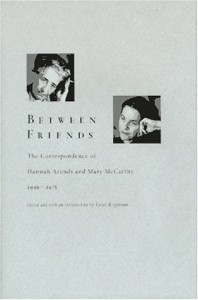 They met in a Manhattan bar in 1944. Mary later said she was struck by Hannah’s skeptical wit and extraordinary vitality. “She filled me with delight and wonder,” Mary said.

The attraction was mutual -- sparked by personal proclivities, fueled by creative and political aspirations, and occasionally short-circuited by crossed wires but never for long. For thirty years the women adored each other, and for thirty years they corresponded when apart, which was more often than not.

Carol Brightman, who compiled this volume, rightly calls their correspondence an epistolary romance.

Fantasy was at work here, fantasies of considerable creative potential for both women, not only for their friendship, which grew by leaps and bounds after an early misunderstanding, but also for their work, much of which was inspired by the ideals attached to the other’s (personal and political) traditions. (from Brightman's introduction)

Their friends and associates were among the best and brightest and most exasperating minds within the American left and the international community of arts and letters.

Their correspondence commences in March 1949 with a note from Hannah to Mary enthusing about The Oasis, Mary’s satirical novella about utopian intellectuals that Hannah called “a little masterpiece.” It ends some 400 pages later in November 1975 with a note from Mary to Hannah updating her on the progress of Mary’s novel Cannibals and Missionaries. “I’ll write again soon, a real letter,” Mary said in closing, “I miss you.” Before she had a chance, less than a month later, Hannah collapsed and died from a heart attack in her apartment following a dinner party with friends, and I don’t at all mind admitting that I cried while reading about it.

The cumulative glimpses result in written portraits as intimate as the book jacket photos, which show each woman as is – aware of being photographed, certainly, but candid and unretouched nonetheless, and no less lovely for being so.

The following bits taken from one letter – Hannah to Mary in August 1969 – capture the variety of things that make this collection so interesting to read -- the literary exchanges, the big ideas, the daily grind and personal travails, the travels, the many friends and colleagues, and much much love.

Immediately after your letter I got the Review of Books with your Sarraute piece and read it with great enthusiasm, not just because of the quality of the piece itself but rather because there is so much in it that is very, very close to things I have been thinking about . . .

One could say, with Aristotle, everything that is appears, but the point here is that everything alive, every living organism, seems to have an urge to appear . . . and survival of the species fails to account for the very richness of the phenomena . . . The language of bees, their dance, or the sounds of birds are quite adequate for the purpose of mere information, but (human) words survive and transcend the life-conditioned purposes, at least so long as the species lasts, and words become part of the world.

The inner uprush is like the inevitable noise of our functional apparatus, which Broch called Seelenlarm or soul noise. It is what makes us tick . . .

I hope your slipped disk is all right again, and you are still breathless with pleasure in your home . . . We had a spectacularly marvelous summer, many guests, the children of my Israeli family and an old love of mine . . . We shall leave here in about a week, first for Zurich, with Basel and Freiburg thrown in . . .

How is Jim? How are the Lowells? Well, how is everybody? Did you know that Saul Bellow and Harold Rosenberg want to start a new magazine together? Strange, isn’t it?

My dear, be well, take care and much much love to you.